About The Beery Traveler 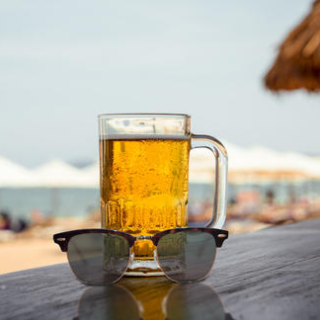 Just one half of a fun-loving, adventurous couple traveling our way to retirement...and beyond! Hope you enjoy the blog!

Sometimes when you reach a certain age in life you discover that the entire Christmas Season can really be more of a stress-filled pain in the ass rather than the joyous time it once was. Of course, it could also be that I’m becoming more of a crotchety old curmudgeon with each passing year. Nawww….I don’t think so.  In any case, after one disastrous Christmas gathering after another, the last of which Tina and I hosted, I resolutely vowed: “never again”!

Kids are grown and gone, and the rest of the family is spread far and wide. What better time to jump on a plane and head to warmer climes? Tina took no convincing as she had been suggesting getting away for Christmas for the past few years. It was the stubborn old man that had been holding out hope for a pleasant Christmas experience. No more! Get me outta here!

During a subsequent summertime conversation with our good travel buddies Dave and Kathleen, they mentioned that they too were done with Christmas in Canada and were considering destinations for the upcoming holiday.  Excellent! Where to go??

We had almost left planning this vacation too late! As you’re probably aware, travelling during any holiday period means paying highly inflated prices for both flights, and accommodations. Therefore, we needed to find something that wasn’t going to break the bank but still put us into a nice location. Voila! Costa Rica!

In previous posts I’ve mentioned how the wife and I tend to have a couple of different travel styles. A “recharge the batteries” vacation, as well as a more of an “adventure” vacation.  None of us were really interested in an all-inclusive resort this time around, so we agreed that we would begin combing through VRBO for suitable accommodations. As it turned out, we found a lovely villa across from the beach at Vista Ocotal near Coco Beach in the province of Guanacaste, about 45 minutes from the airport at Liberia.  Adding to the excitement of this upcoming vacation was the fact that we would be joined by another couple who were also long-time friends! Villa for 6, please!

Wifey and I were excited since Costa Rica was another destination we were considering for our retirement, so we were going to take in as much info from the locals as we could and really try to immerse ourselves in the culture. There was definitely opportunity to do that with the long list of excursions and day trips that we had planned, and with our rental car, we were going to see just what the country was really like!

Less than an hour after touch-down at Liberia, we were unpacking our bags in our beautifully appointed villa and catching up with our four friends. We couldn’t have asked for a nicer location. Quiet and secluded at the end of the road to the beach and surrounded by tropical gardens with a large pool and patio with kitchen. Nestled at the base of a high cliff, we would be taking the opportunity later in the week to see some breathtaking views.

It would take me days to describe just half of the amazing things we saw and did while we were in Costa Rica. Quite frankly, I can’t even decide where to begin. From our first moments that first day where we enjoyed local cuisine at the beach bar across from our villa, to our last morning exploring the countryside by car after one of the best traditional breakfasts we’ve ever had, Costa Rica has so much to offer!

We made sure we took in as much as we could while we were there. We visited a volcano where we enjoyed soaking in the natural hot springs and mud baths. We trekked through the jungle to marvel at multiple natural waterfalls. We journeyed across a suspension bridge, watched howler monkeys crawling across our roof, shopped the local villages for fresh produce and handcrafted souvenirs, and managed to take in a local rodeo as well. We laid out on the mostly private beach and basked in the Caribbean sun while the waves rolled in and lulled us to sleep. Being travel agents, Tina and I also checked out a few of the local resorts as well. We talked to the locals and learned about life in Costa Rica, and spoke with a few expats that had made Costa Rica their retirement home.

The province of Guanacaste is fairly large, but we managed to experience a fair bit of it during our stay in Costa Rica. There seems to be something for everyone there. Snorkelling, fishing, and diving along the coast with towering clifftops that offer amazing vistas, lush jungles full of amazing birds, monkeys, and sloths, deserts and mountains too, all within an afternoon’s drive from your home base. At times, we were struck by how similar the landscape is to areas of Ecuador, as well as the quality of the meals and the friendliness of the people.

View from the clifftop

December 25th arrived exactly the same as any other day.  We enjoyed the same morning ritual of making coffee and lounging by the pool discussing what we might like to do that day prior to meeting for dinner at the swanky restaurant we had made reservations at prior to leaving Canada. Each of us listened to one, and only one, of our favourite Christmas songs, and then it was off to the beach! Our Christmas dinner was a little bit of everything off the menu, and many drinks were consumed.  I would have to say it was one of the best Christmases I can remember.

Costa Rica proved to be a real winner with all of us. Lots to see and do, great food, nice people, beautiful countryside, amazing accommodations, it just doesn’t get any better. On the downside, we did notice that in the tourist areas, prices for just about everything were on the high side. We had been comparing Costa Rica to Ecuador throughout the trip and from an expense standpoint, Costa Rica was significantly more expensive.  In the more rural areas we explored, prices dropped considerably where there was no sign of tourism.  Pretty standard for most places, but a couple of miles sure made a difference.  We also learned that any areas with built-up infrastructure was much more expensive than those without. Obviously.  So if you want to buy beachfront property for cheap, you can, but you have to carve it out of the jungle yourself and live without electricity or running water until the rest of the area gets developed. Lots of people are doing just that.

Would I visit Costa Rica again?  Absolutely.  In a heartbeat. It’s one of my new favourite destinations, and would DEFINITELY recommend a Costa Rican Christmas!

Just one half of a fun-loving, adventurous couple traveling our way to retirement...and beyond! Hope you enjoy the blog! View all posts by thebeerytraveler1962